What is unpaired two-samples t-test?

The unpaired two-samples t-test is used to compare the mean of two independent groups.

In this case, we have two unrelated (i.e., independent or unpaired) groups of samples. Therefore, it’s possible to use an independent t-test to evaluate whether the means are different.

Note that, unpaired two-samples t-test can be used only under certain conditions:

This article describes the formula of the independent t-test and provides pratical examples in R. 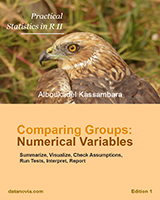 
In statistics, we can define the corresponding null hypothesis (\(H_0\)) as follow:

If the variance of the two groups are equivalent (homoscedasticity), the t-test value, comparing the two samples (\(A\) and \(B\)), can be calculated as follow.

If the variances of the two groups being compared are different (heteroscedasticity), it’s possible to use the Welch t test, an adaptation of Student t-test.

where, \(S_A\) and \(S_B\) are the standard deviation of the the two groups A and B, respectively.

Unlike the classic Student’s t-test, Welch t-test formula involves the variance of each of the two groups (\(S_A^2\) and \(S_B^2\)) being compared. In other words, it does not use the pooled variance\(S\).

The degrees of freedom of Welch t-test is estimated as follow :

A p-value can be computed for the corresponding absolute value of t-statistic (|t|).

Note that, the Welch t-test is considered as the safer one. Usually, the results of the classical t-test and the Welch t-test are very similar unless both the group sizes and the standard deviations are very different.

How to interpret the results?

If the p-value is inferior or equal to the significance level 0.05, we can reject the null hypothesis and accept the alternative hypothesis. In other words, we can conclude that the mean values of group A and B are significantly different.

You can draw R base graphs as described at this link: R base graphs. Here, we’ll use the ggpubr R package for an easy ggplot2-based data visualization

To perform two-samples t-test comparing the means of two independent samples (x & y), the R function t.test() can be used as follow:

Import your data into R

Here, we’ll use an example data set, which contains the weight of 18 individuals (9 women and 9 men):

It’s possible to compute summary statistics (mean and sd) by groups. The dplyr package can be used.

Assumption 1: Are the two samples independents?

Yes, since the samples from men and women are not related.

Assumtion 2: Are the data from each of the 2 groups follow a normal distribution?

We’ll use the functions with() and shapiro.test() to compute Shapiro-Wilk test for each group of samples.

From the output, the two p-values are greater than the significance level 0.05 implying that the distribution of the data are not significantly different from the normal distribution. In other words, we can assume the normality.

Note that, if the data are not normally distributed, it’s recommended to use the non parametric two-samples Wilcoxon rank test.

Assumption 3. Do the two populations have the same variances?

We’ll use F-test to test for homogeneity in variances. This can be performed with the function var.test() as follow:

Question : Is there any significant difference between women and men weights?

2) Compute independent t-test - Method 2: The data are saved in a data frame.

As you can see, the two methods give the same results.


In the result above :

Interpretation of the result

The result of t.test() function is a list containing the following components:


The format of the R code to use for getting these values is as follow:

You can perform unpaired two-samples t-test, online, without any installation by clicking the following link:

This analysis has been performed using R software (ver. 3.2.4).

Enjoyed this article? I’d be very grateful if you’d help it spread by emailing it to a friend, or sharing it on Twitter, Facebook or Linked In.


Want to Learn More on R Programming and Data Science?