The simple linear regression is used to predict a quantitative outcome y on the basis of one single predictor variable x. The goal is to build a mathematical model (or formula) that defines y as a function of the x variable.

Once, we built a statistically significant model, it’s possible to use it for predicting future outcome on the basis of new x values.

Consider that, we want to evaluate the impact of advertising budgets of three medias (youtube, facebook and newspaper) on future sales. This example of problem can be modeled with linear regression.

The mathematical formula of the linear regression can be written as y = b0 + b1*x + e, where:

The figure below illustrates the linear regression model, where: 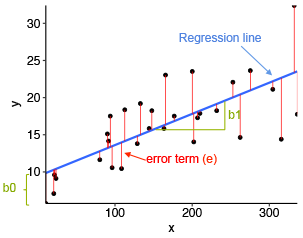 Examples of data and problem

We’ll use the marketing data set [datarium package]. It contains the impact of three advertising medias (youtube, facebook and newspaper) on sales. Data are the advertising budget in thousands of dollars along with the sales. The advertising experiment has been repeated 200 times with different budgets and the observed sales have been recorded.

First install the datarium package using devtools::install_github("kassmbara/datarium"), then load and inspect the marketing data as follow:

We want to predict future sales on the basis of advertising budget spent on youtube. 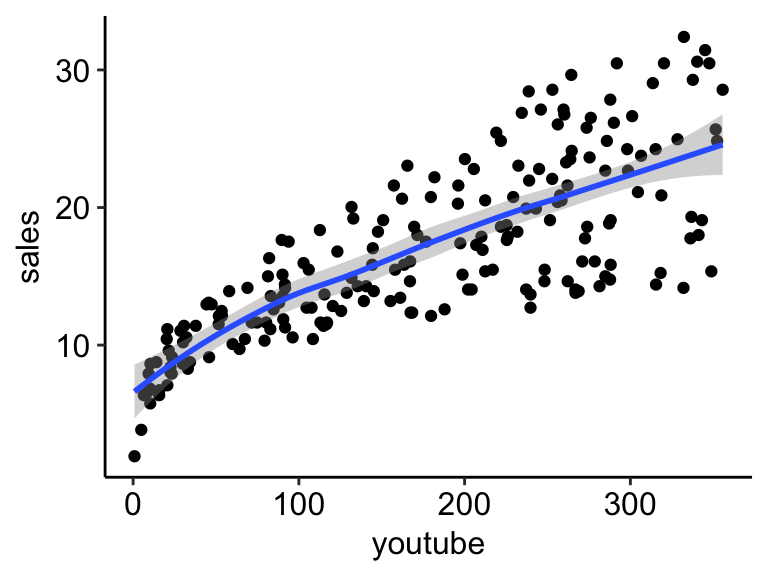 A value closer to 0 suggests a weak relationship between the variables. A low correlation (-0.2 < x < 0.2) probably suggests that much of variation of the outcome variable (y) is not explained by the predictor (x). In such case, we should probably look for better predictor variables.

In our example, the correlation coefficient is large enough, so we can continue by building a linear model of y as a function of x.

The simple linear regression tries to find the best line to predict sales on the basis of youtube advertising budget.

The R function lm() can be used to determine the beta coefficients of the linear model:

The results show the intercept and the beta coefficient for the youtube variable.

From the output above:

In the previous section, we built a linear model of sales as a function of youtube advertising budget: sales = 8.44 + 0.048*youtube.

Before using this formula to predict future sales, you should make sure that this model is statistically significant, that is:

In this section, we’ll describe how to check the quality of a linear regression model.

We start by displaying the statistical summary of the model using the R function summary():

The coefficients table, in the model statistical summary, shows:

Mathematically, for a given beta coefficient (b), the t-test is computed as t = (b - 0)/SE(b), where SE(b) is the standard error of the coefficient b. The t-statistic measures the number of standard deviations that b is away from 0. Thus a large t-statistic will produce a small p-value.

A statistically significant coefficient indicates that there is an association between the predictor (x) and the outcome (y) variable.

In our example, both the p-values for the intercept and the predictor variable are highly significant, so we can reject the null hypothesis and accept the alternative hypothesis, which means that there is a significant association between the predictor and the outcome variables.

The standard error measures the variability/accuracy of the beta coefficients. It can be used to compute the confidence intervals of the coefficients.

To get these information, simply type:

Once you identified that, at least, one predictor variable is significantly associated the outcome, you should continue the diagnostic by checking how well the model fits the data. This process is also referred to as the goodness-of-fit

The RSE (also known as the model sigma) is the residual variation, representing the average variation of the observations points around the fitted regression line. This is the standard deviation of residual errors.

RSE provides an absolute measure of patterns in the data that can’t be explained by the model. When comparing two models, the model with the small RSE is a good indication that this model fits the best the data.

In our example, RSE = 3.91, meaning that the observed sales values deviate from the true regression line by approximately 3.9 units in average.

The R-squared (R2) ranges from 0 to 1 and represents the proportion of information (i.e. variation) in the data that can be explained by the model. The adjusted R-squared adjusts for the degrees of freedom.

The R2 measures, how well the model fits the data. For a simple linear regression, R2 is the square of the Pearson correlation coefficient.

A high value of R2 is a good indication. However, as the value of R2 tends to increase when more predictors are added in the model, such as in multiple linear regression model, you should mainly consider the adjusted R-squared, which is a penalized R2 for a higher number of predictors.

The F-statistic gives the overall significance of the model. It assess whether at least one predictor variable has a non-zero coefficient.

In a simple linear regression, this test is not really interesting since it just duplicates the information in given by the t-test, available in the coefficient table. In fact, the F test is identical to the square of the t test: 312.1 = (17.67)^2. This is true in any model with 1 degree of freedom.

After computing a regression model, a first step is to check whether, at least, one predictor is significantly associated with outcome variables.

If one or more predictors are significant, the second step is to assess how well the model fits the data by inspecting the Residuals Standard Error (RSE), the R2 value and the F-statistics. These metrics give the overall quality of the model.

Great post. I did need to adjust one line to make the experience work. I received a 404 error using devtools::... command as presented in the web page... this solution worked.

Thanks again for sharing this lesson on linear regression.
Visitor
Visitor

I think that there is a typo in the following sentence:


Quotation :
e is the error term (also known as the residual errors), the part of y that can be explained by the regression model

It should not be:
Quotation :
part of y that cannot be explained
instead?