This chapter presents regression methods based on dimension reduction techniques, which can be very useful when you have a large data set with multiple correlated predictor variables.

Generally, all dimension reduction methods work by first summarizing the original predictors into few new variables called principal components (PCs), which are then used as predictors to fit the linear regression model. These methods avoid multicollinearity between predictors, which a big issue in regression setting (see Chapter @ref(multicollinearity)).

When using the dimension reduction methods, it’s generally recommended to standardize each predictor to make them comparable. Standardization consists of dividing the predictor by its standard deviation.

These PCs are then used to build the linear regression model. The number of principal components, to incorporate in the model, is chosen by cross-validation (cv). Note that, PCR is suitable when the data set contains highly correlated predictors.

An alternative to PCR is the Partial Least Squares (PLS) regression, which identifies new principal components that not only summarizes the original predictors, but also that are related to the outcome. These components are then used to fit the regression model. So, compared to PCR, PLS uses a dimension reduction strategy that is supervised by the outcome.

Like PCR, PLS is convenient for data with highly-correlated predictors. The number of PCs used in PLS is generally chosen by cross-validation. Predictors and the outcome variables should be generally standardized, to make the variables comparable.

We’ll use the Boston data set [in MASS package], introduced in Chapter @ref(regression-analysis), for predicting the median house value (mdev), in Boston Suburbs, based on multiple predictor variables.

The R function train() [caret package] provides an easy workflow to compute PCR and PLS by invoking the pls package. It has an option named method, which can take the value pcr or pls.

An additional argument is scale = TRUE for standardizing the variables to make them comparable.

caret uses cross-validation to automatically identify the optimal number of principal components (ncomp) to be incorporated in the model.

Here, we’ll test 10 different values of the tuning parameter ncomp. This is specified using the option tuneLength. The optimal number of principal components is selected so that the cross-validation error (RMSE) is minimized. 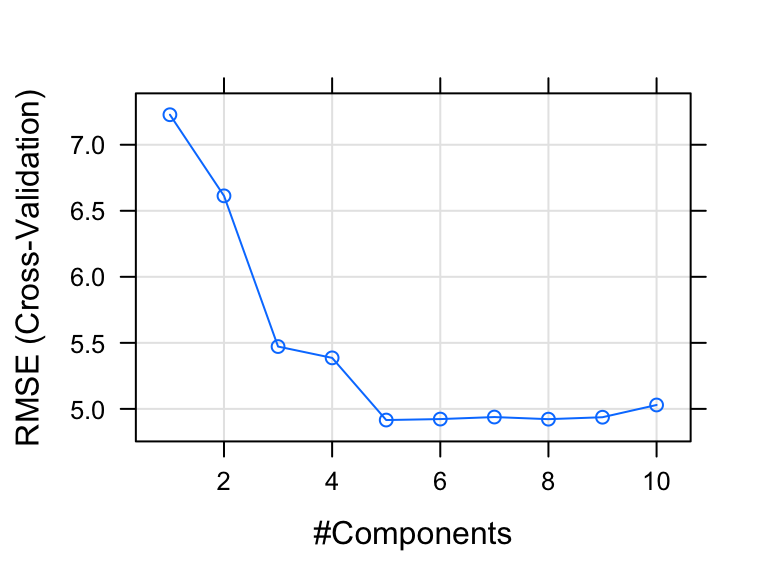 The plot shows the prediction error (RMSE, Chapter @ref(regression-model-accuracy-metrics)) made by the model according to the number of principal components incorporated in the model.

The summary() function also provides the percentage of variance explained in the predictors (x) and in the outcome (medv) using different numbers of components.

For example, 80.94% of the variation (or information) contained in the predictors are captured by 5 principal components (ncomp = 5). Additionally, setting ncomp = 5, captures 71% of the information in the outcome variable (medv), which is good.

Taken together, cross-validation identifies ncomp = 5 as the optimal number of PCs that minimize the prediction error (RMSE) and explains enough variation in the predictors and in the outcome.

The R code is just like that of the PCR method. 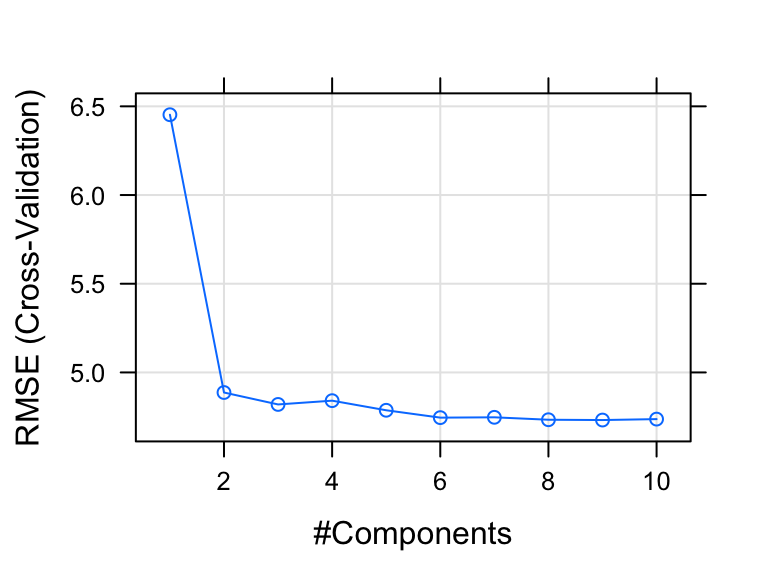 The presence of correlation in the data allows to summarize the data into few non-redundant components that can be used in the regression model.

Compared to ridge regression and lasso (Chapter @ref(penalized-regression)), the final PCR and PLS models are more difficult to interpret, because they do not perform any kind of variable selection or even directly produce regression coefficient estimates.

Thank you very much for your feedback!
sfd
Member

We want each reader to rate , an article, only once. The only possible solution to ensure this is to be registered on STHDA as a member.
Visitor
Visitor

Yes, posting a comment
is much easier now
(and exactly as effective against bots!).

You'll get many more comments
from the STHDA community now!. :-)

I have to 5 *****
many of your Articles, Kassambara!.
Seriously!.
SFer
kassambara
Administrator

Thank you for your feedback. It really helps.

Issue a) readers needs to be a member to vote. This has been now specified in the call for voting message.

BTW:
Me (and surely others),
are having difficulties:

for ex:
many times I wanted to leave FIVE stars
for one of your truly excellent Articles.

As soon as I click on the 5th star,
(all 5 stars illuminate Ok)
but then a message popup, says:
- "You don't have the required level!".

With the present anti-bot filter
before it allows te reader to post a Comment,
ie" "select all images with a car" etc.
it's a real pain and frustrating.
The images are sometimes ambiguous
and hard to "see".

In Summary:
I think these 2 factors
are not just for your great R Articles.

You'd get many more
Stars and Comments in each Article,
if you made it easier
for your readers (like me!)...

All in good will, Kassambara.
Your Blog is truly great.
Hope this helps!.