Logistic regression is used to predict the class (or category) of individuals based on one or multiple predictor variables (x). It is used to model a binary outcome, that is a variable, which can have only two possible values: 0 or 1, yes or no, diseased or non-diseased.

Logistic regression does not return directly the class of observations. It allows us to estimate the probability (p) of class membership. The probability will range between 0 and 1. You need to decide the threshold probability at which the category flips from one to the other. By default, this is set to p = 0.5, but in reality it should be settled based on the analysis purpose.

In this chapter you’ll learn how to:

The quantity log[p/(1-p)] is called the logarithm of the odd, also known as log-odd or logit.

Note that, the probability can be calculated from the odds as p = Odds/(1 + Odds).

Logistic regression works for a data that contain continuous and/or categorical predictor variables.

Performing the following steps might improve the accuracy of your model

Here, we’ll use the PimaIndiansDiabetes2 [in mlbench package], introduced in Chapter @ref(classification-in-r), for predicting the probability of being diabetes positive based on multiple clinical variables.

The simple logistic regression is used to predict the probability of class membership based on one single predictor variable.

The following R code builds a model to predict the probability of being diabetes-positive based on the plasma glucose concentration:

The output above shows the estimate of the regression beta coefficients and their significance levels. The intercept (b0) is -6.32 and the coefficient of glucose variable is 0.043.

Predictions can be easily made using the function predict(). Use the option type = “response” to directly obtain the probabilities 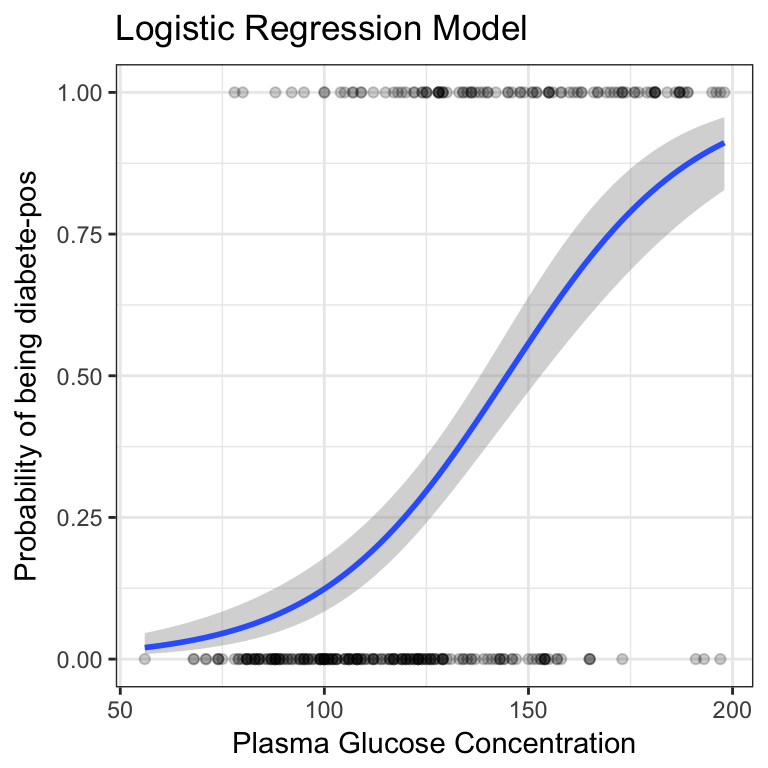 The multiple logistic regression is used to predict the probability of class membership based on multiple predictor variables, as follow:

Here, we want to include all the predictor variables available in the data set. This is done using ~.:

From the output above, the coefficients table shows the beta coefficient estimates and their significance levels. Columns are:

Note that, the functions coef() and summary() can be used to extract only the coefficients, as follow:

It can be seen that only 5 out of the 8 predictors are significantly associated to the outcome. These include: pregnant, glucose, pressure, mass and pedigree.

The coefficient estimate of the variable glucose is b = 0.045, which is positive. This means that an increase in glucose is associated with increase in the probability of being diabetes-positive. However the coefficient for the variable pressure is b = -0.007, which is negative. This means that an increase in blood pressure will be associated with a decreased probability of being diabetes-positive.

An important concept to understand, for interpreting the logistic beta coefficients, is the odds ratio. An odds ratio measures the association between a predictor variable (x) and the outcome variable (y). It represents the ratio of the odds that an event will occur (event = 1) given the presence of the predictor x (x = 1), compared to the odds of the event occurring in the absence of that predictor (x = 0).

For a given predictor (say x1), the associated beta coefficient (b1) in the logistic regression function corresponds to the log of the odds ratio for that predictor.

For example, the regression coefficient for glucose is 0.042. This indicate that one unit increase in the glucose concentration will increase the odds of being diabetes-positive by exp(0.042) 1.04 times.

From the logistic regression results, it can be noticed that some variables - triceps, insulin and age - are not statistically significant. Keeping them in the model may contribute to overfitting. Therefore, they should be eliminated. This can be done automatically using statistical techniques, including stepwise regression and penalized regression methods. This methods are described in the next section. Briefly, they consist of selecting an optimal model with a reduced set of variables, without compromising the model curacy.

Here, as we have a small number of predictors (n = 9), we can select manually the most significant:

We’ll make predictions using the test data in order to evaluate the performance of our logistic regression model.

The R function predict() can be used to predict the probability of being diabetes-positive, given the predictor values.

Predict the probabilities of being diabetes-positive:

Which classes do these probabilities refer to? In our example, the output is the probability that the diabetes test will be positive. We know that these values correspond to the probability of the test to be positive, rather than negative, because the contrasts() function indicates that R has created a dummy variable with a 1 for “pos” and “0” for neg. The probabilities always refer to the class dummy-coded as “1”.

Predict the class of individuals:

Note that, there are several metrics for evaluating the performance of a classification model (Chapter @ref(classification-model-evaluation)).

Note that, many concepts for linear regression hold true for the logistic regression modeling. For example, you need to perform some diagnostics (Chapter @ref(logistic-regression-assumptions-and-diagnostics)) to make sure that the assumptions made by the model are met for your data.

Furthermore, you need to measure how good the model is in predicting the outcome of new test data observations. Here, we described how to compute the raw classification accuracy, but not that other important performance metric exists (Chapter @ref(classification-model-evaluation))

You can also fit generalized additive models (Chapter @ref(polynomial-and-spline-regression)), when linearity of the predictor cannot be assumed. This can be done using the mgcv package:

Note that, the most popular method, for multiclass tasks, is the Linear Discriminant Analysis (Chapter @ref(discriminant-analysis)).

Must be players exited to join it nice fun to play <a href="http://ginrummy.me">gin rummy</a> free online game it is the best way to all of you.
kassambara
Administrator

Fixed know, many thanks for your feedback.
sfd
Member

Great and clear article, Kassambara.
Thanks!.

A possible typo:
near the end, where you say: