Previously, we have described the logistic regression for two-class classification problems, that is when the outcome variable has two possible values (0/1, no/yes, negative/positive).

Compared to logistic regression, the discriminant analysis is more suitable for predicting the category of an observation in the situation where the outcome variable contains more than two classes. Additionally, it’s more stable than the logistic regression for multi-class classification problems.

Note that, both logistic regression and discriminant analysis can be used for binary classification tasks.

In this chapter, you’ll learn the most widely used discriminant analysis techniques and extensions. Additionally, we’ll provide R code to perform the different types of analysis.

The following discriminant analysis methods will be described:

We’ll use the iris data set, introduced in Chapter @ref(classification-in-r), for predicting iris species based on the predictor variables Sepal.Length, Sepal.Width, Petal.Length, Petal.Width.

Discriminant analysis can be affected by the scale/unit in which predictor variables are measured. It’s generally recommended to standardize/normalize continuous predictor before the analysis.

The LDA algorithm starts by finding directions that maximize the separation between classes, then use these directions to predict the class of individuals. These directions, called linear discriminants, are a linear combinations of predictor variables.

LDA assumes that predictors are normally distributed (Gaussian distribution) and that the different classes have class-specific means and equal variance/covariance.

LDA determines group means and computes, for each individual, the probability of belonging to the different groups. The individual is then affected to the group with the highest probability score.

Using the function plot() produces plots of the linear discriminants, obtained by computing LD1 and LD2 for each of the training observations.

Note that, you can create the LDA plot using ggplot2 as follow: 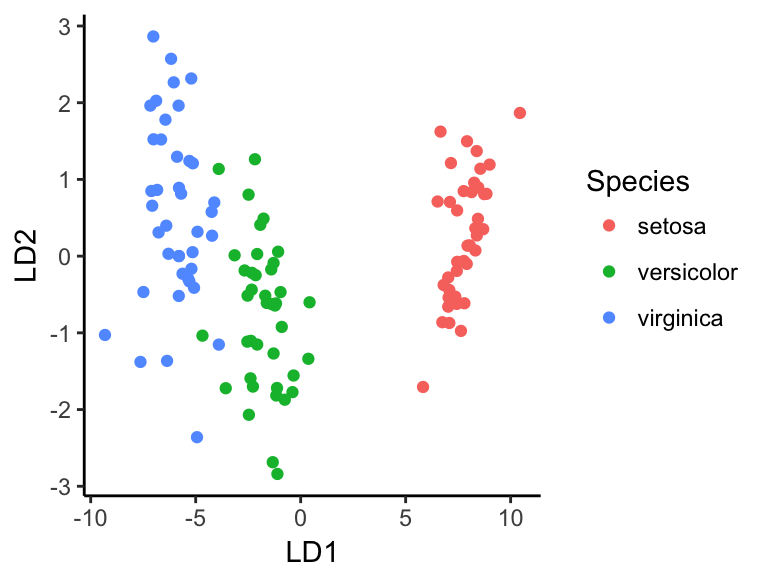 It can be seen that, our model correctly classified 100% of observations, which is excellent.

Note that, by default, the probability cutoff used to decide group-membership is 0.5 (random guessing). For example, the number of observations in the setosa group can be re-calculated using:

In some situations, you might want to increase the precision of the model. In this case you can fine-tune the model by adjusting the posterior probability cutoff. For example, you can increase or lower the cutoff.

Note that, if the predictor variables are standardized before computing LDA, the discriminator weights can be used as measures of variable importance for feature selection.

QDA is little bit more flexible than LDA, in the sense that it does not assumes the equality of variance/covariance. In other words, for QDA the covariance matrix can be different for each class.

LDA tends to be a better than QDA when you have a small training set.

In contrast, QDA is recommended if the training set is very large, so that the variance of the classifier is not a major issue, or if the assumption of a common covariance matrix for the K classes is clearly untenable (James et al. 2014).

The LDA classifier assumes that each class comes from a single normal (or Gaussian) distribution. This is too restrictive.

For MDA, there are classes, and each class is assumed to be a Gaussian mixture of subclasses, where each data point has a probability of belonging to each class. Equality of covariance matrix, among classes, is still assumed.

MDA might outperform LDA and QDA is some situations, as illustrated below. In this example data, we have 3 main groups of individuals, each having 3 no adjacent subgroups. The solid black lines on the plot represent the decision boundaries of LDA, QDA and MDA. It can be seen that the MDA classifier have identified correctly the subclasses compared to LDA and QDA, which were not good at all in modeling this data.

The code for generating the above plots is from John Ramey

FDA is a flexible extension of LDA that uses non-linear combinations of predictors such as splines. FDA is useful to model multivariate non-normality or non-linear relationships among variables within each group, allowing for a more accurate classification.

RDA builds a classification rule by regularizing the group covariance matrices (Friedman 1989) allowing a more robust model against multicollinearity in the data. This might be very useful for a large multivariate data set containing highly correlated predictors.

RDA shrinks the separate covariances of QDA toward a common covariance as in LDA. This improves the estimate of the covariance matrices in situations where the number of predictors is larger than the number of samples in the training data, potentially leading to an improvement of the model accuracy.

We have described linear discriminant analysis (LDA) and extensions for predicting the class of an observations based on multiple predictor variables. Discriminant analysis is more suitable to multiclass classification problems compared to the logistic regression (Chapter @ref(logistic-regression)).

LDA assumes that the different classes has the same variance or covariance matrix. We have described many extensions of LDA in this chapter. The most popular extension of LDA is the quadratic discriminant analysis (QDA), which is more flexible than LDA in the sens that it does not assume the equality of group covariance matrices.

LDA tends to be better than QDA for small data set. QDA is recommended for large training data set.

Alas, theory is like a GPS system through data. At the end of the day almost all the statistical methods, whether machine learning,AI, etc, that are proliferating today existed generations ago. But back then people did not have computer access or computing power to do the empirical analysis so the theories remained relatively dormant.
Visitor
Visitor

Is the feature selection available yet? It is pointless creating LDA without knowing key features that contribute to it and also how to overcome the overfitting issue?
kassambara
Administrator

Feature selection we'll be presented in future blog posts. You can also read the documentation of caret package.
SFd
Visitor

Another super article.
Thank you, STHDA!.

At the end of the LDA section,
you say:

"Note that, if the predictor variables are standardized before computing LDA, the discriminator weights can be used as measures of variable importance for feature selection".

That is really important and useful.
Can you please elaborate a little on this point?
(and give an example?).