Unsupervised learning refers to a set of statistical techniques for exploring and discovering knowledge, from a multivariate data, without building a predictive models.

It makes it possible to visualize the relationship between variables, as well as, to identify groups of similar individuals (or observations).

The most popular unsupervised learning methods, include:

Previously, we have published two books entitled “Practical Guide To Cluster Analysis in R” and “Practical Guide To Principal Component Methods”. So, this chapter provides just an overview of unsupervised learning techniques and practical examples in R for visualizing multivariate data sets.

Principal component methods allows us to summarize and visualize the most important information contained in a multivariate data set.

The type of principal component methods to use depends on variable types contained in the data set. This practical guide will describe the following methods:

PCA reduces the data into few new dimensions (or axes), which are a linear combination of the original variables. You can visualize a multivariate data by drawing a scatter plot of the first two dimensions, which contain the most important information in the data. Read more at: https://goo.gl/kabVHq. 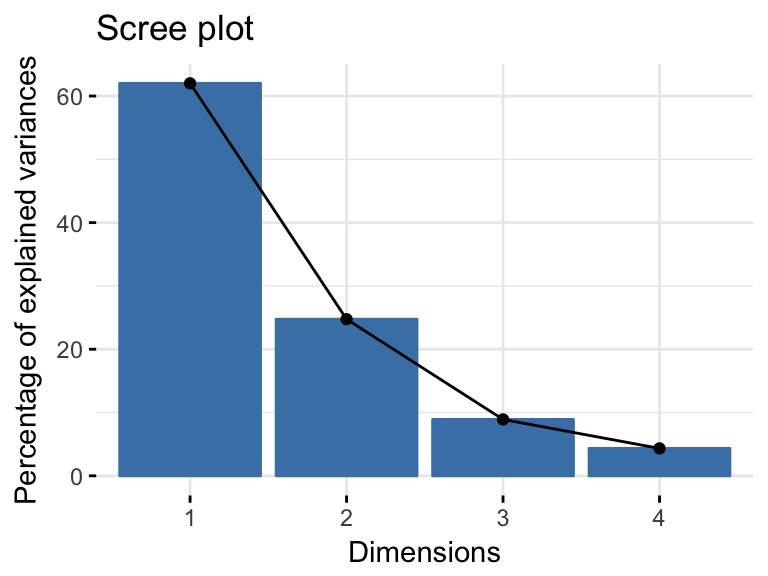 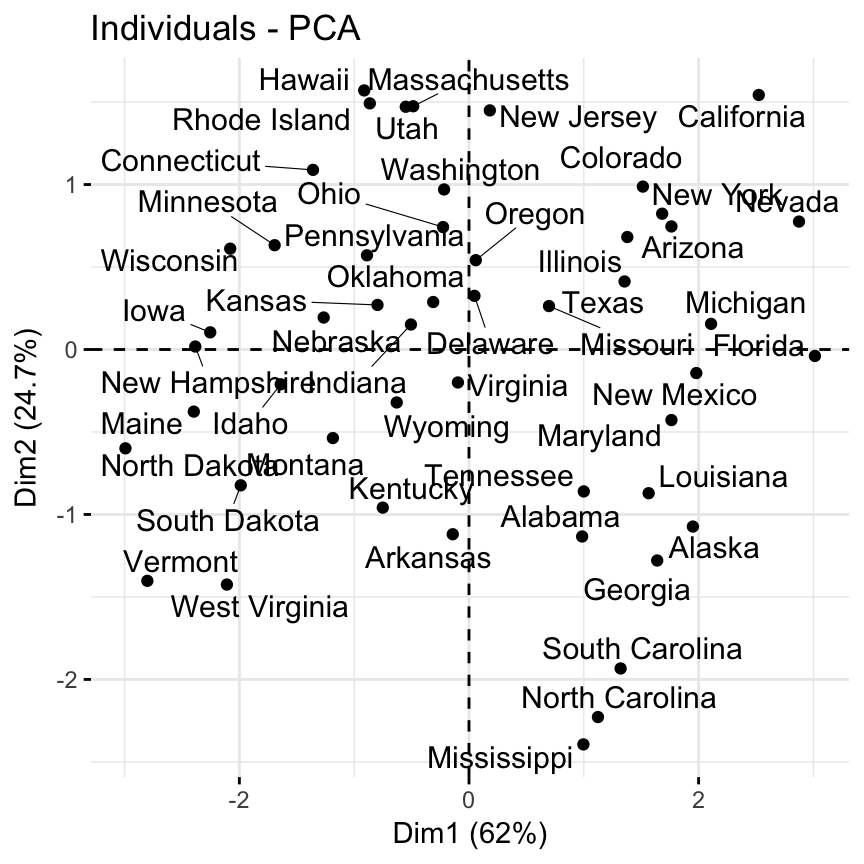 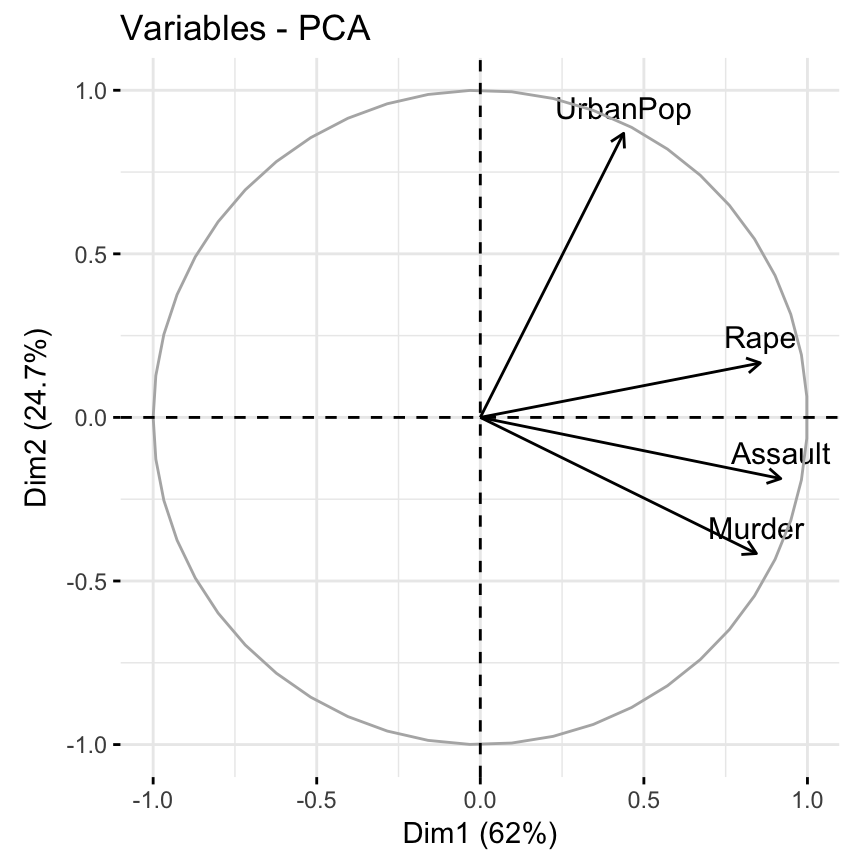 The plot shows the association between row and column points of the contingency table. 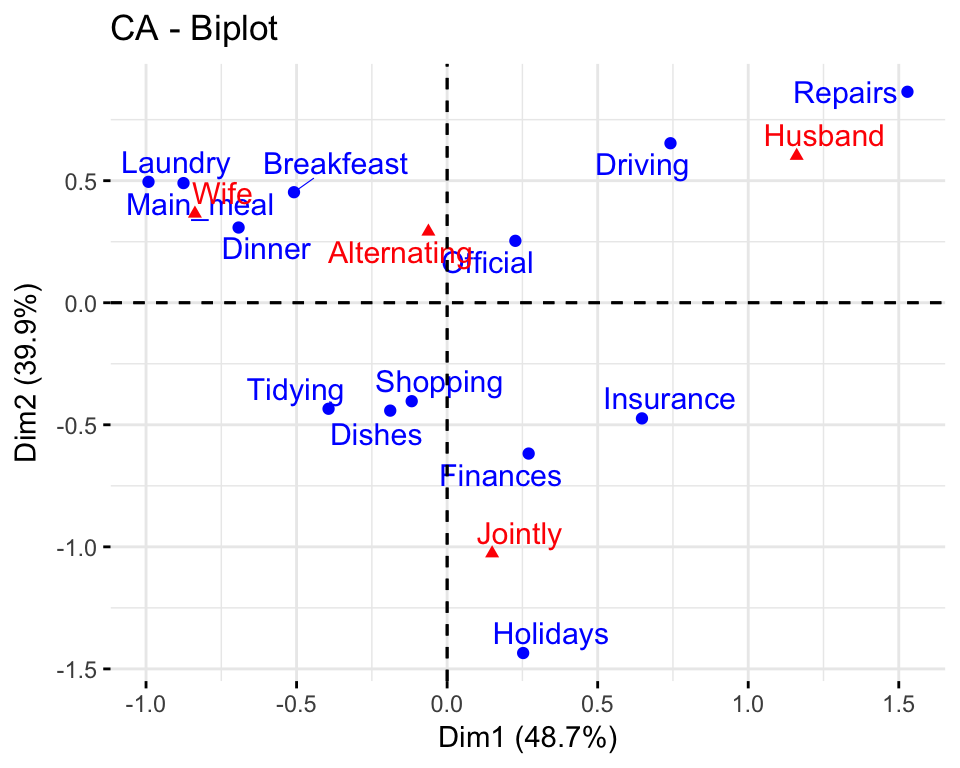 From the graphic above, it’s can be seen that:

MCA is generally used to analyse a data set from survey. The goal is to identify: 1) A group of individuals with similar profile in their answers to the questions; 2) The associations between variable categories

The data contain some supplementary variables. They don’t participate to the MCA. The coordinates of these variables will be predicted. 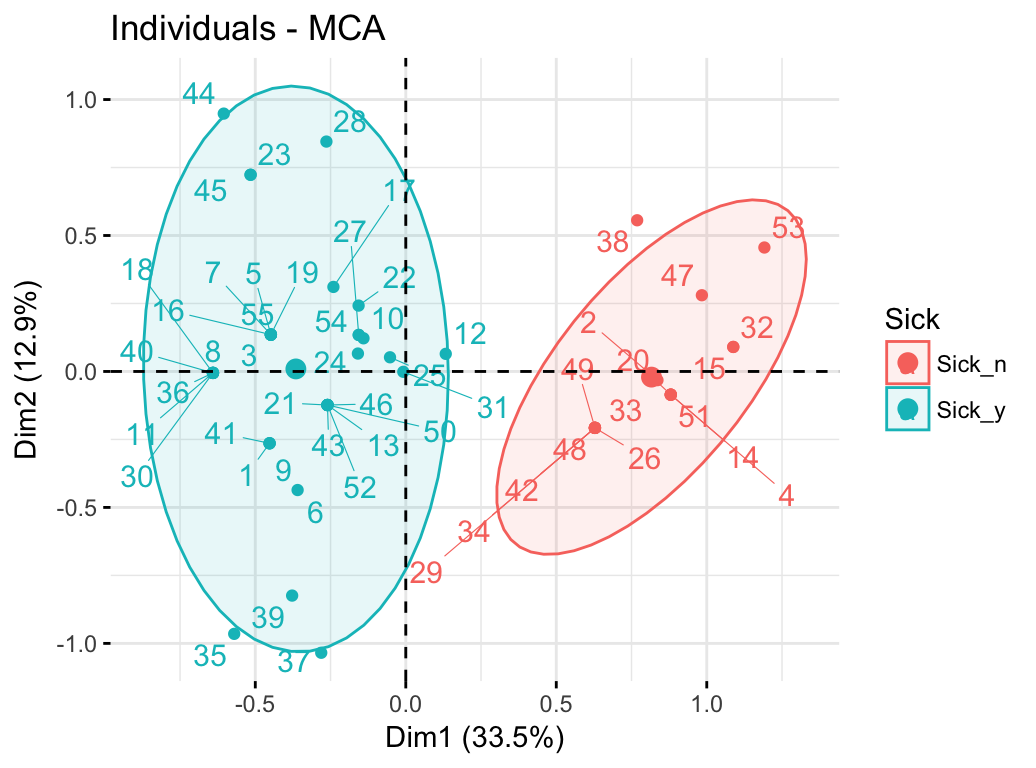 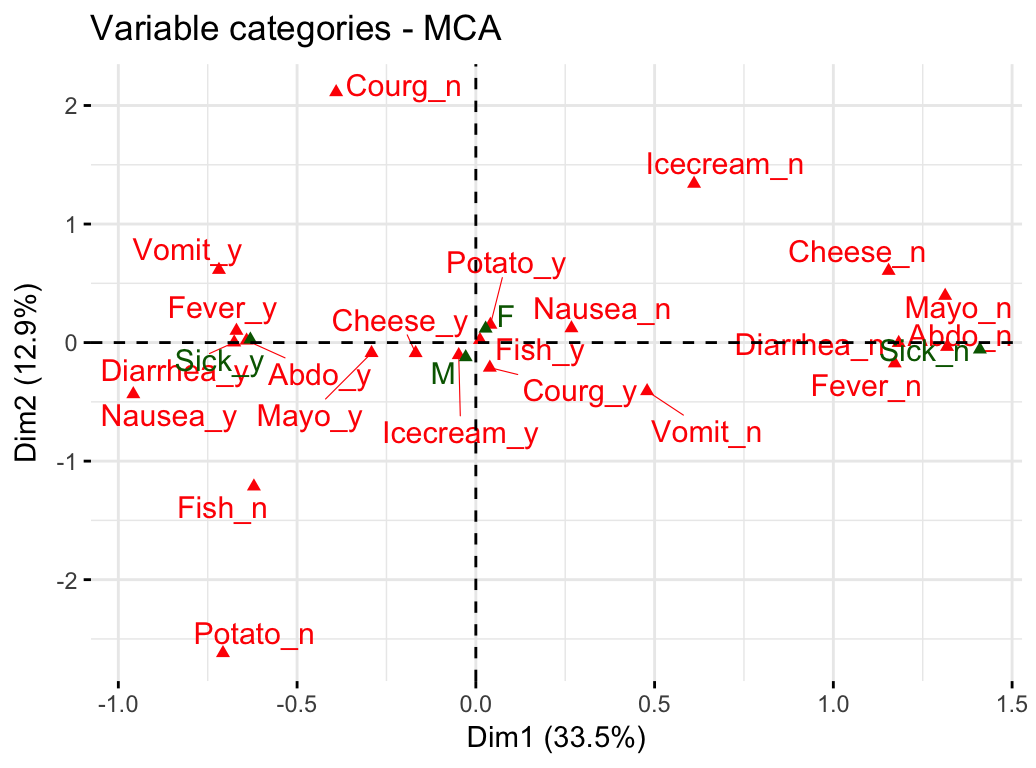 Biplot of individuals and variables. The plot above shows a global pattern within the data. Rows (individuals) are represented by blue points and columns (variable categories) by red triangles. Variables and individuals that are positively associated are on the same side of the plot.

Cluster analysis is used to identify groups of similar objects in a multivariate data sets collected from fields such as marketing, bio-medical and geo-spatial. Read more at: http://www.sthda.com/english/articles/25-cluster-analysis-in-r-practical-guide/.

Distance measures. The classification of observations into groups requires some methods for computing the distance or the (dis)similarity between each pair of observations. The result of this computation is known as a dissimilarity or distance matrix. There are different methods for measuring distances, including:

Depending on the type of the data and the researcher questions, other dissimilarity measures might be preferred.

If we want to identify clusters of observations with the same overall profiles regardless of their magnitudes, then we should go with correlation-based distance as a dissimilarity measure. This is particularly the case in gene expression data analysis, where we might want to consider genes similar when they are “up” and “down” together. It is also the case, in marketing if we want to identify group of shoppers with the same preference in term of items, regardless of the volume of items they bought.

Data standardization. Before cluster analysis, it’s recommended to scale (or normalize) the data, to make the variables comparable. This is particularly recommended when variables are measured in different scales (e.g: kilograms, kilometers, centimeters, …); otherwise, the dissimilarity measures obtained will be severely affected. R function for scaling the data: scale(), applies scaling on the column of the data (variables).

We’ll use the demo data set USArrests. We start by standardizing the data:

Partitioning algorithms are clustering techniques that subdivide the data sets into a set of k groups, where k is the number of groups pre-specified by the analyst.

There are different types of partitioning clustering methods. The most popular is the K-means clustering, in which, each cluster is represented by the center or means of the data points belonging to the cluster. The K-means method is sensitive to outliers.

An alternative to k-means clustering is the K-medoids clustering or PAM (Partitioning Around Medoids), which is less sensitive to outliers compared to k-means.

The following R codes show how to determine the optimal number of clusters and how to compute k-means and PAM clustering in R. 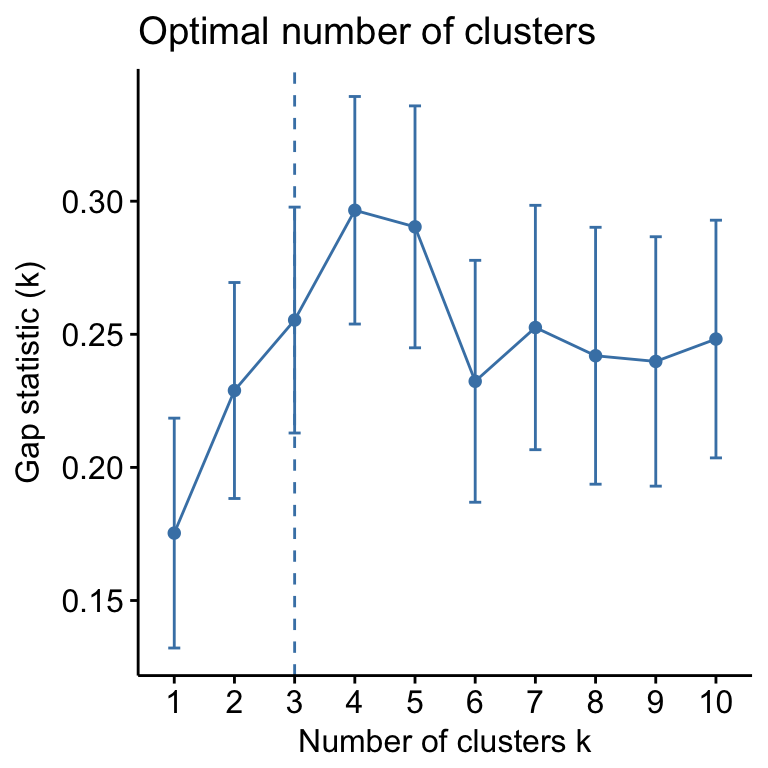 Hierarchical clustering is an alternative approach to partitioning clustering for identifying groups in the data set. It does not require to pre-specify the number of clusters to be generated.

The result of hierarchical clustering is a tree-based representation of the objects, which is also known as dendrogram. Observations can be subdivided into groups by cutting the dendrogram at a desired similarity level. 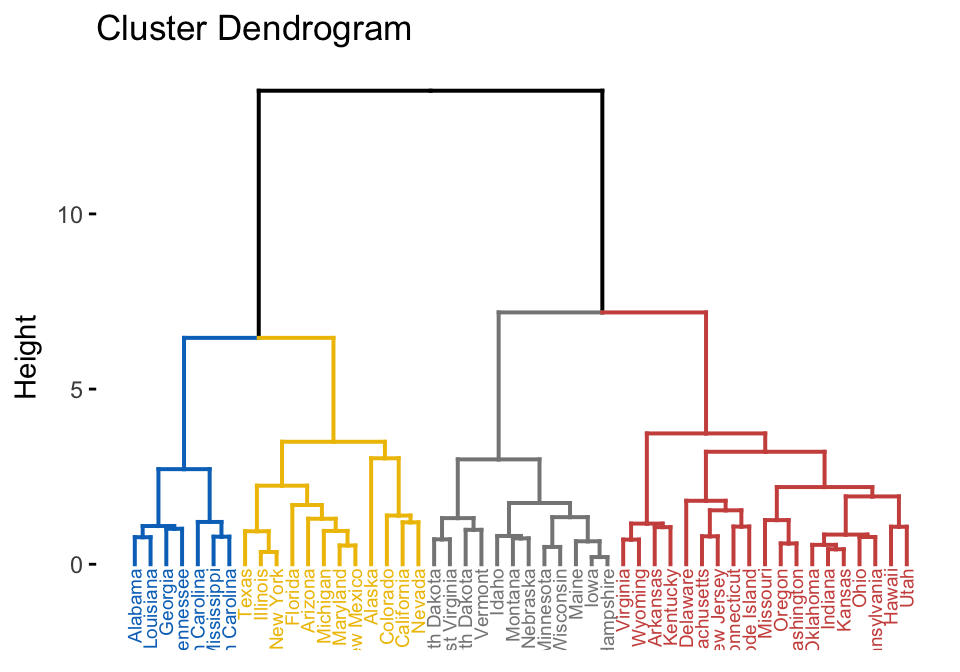 A heatmap is another way to visualize hierarchical clustering. It’s also called a false colored image, where data values are transformed to color scale. Heat maps allow us to simultaneously visualize groups of samples and features. You can easily create a pretty heatmap using the R package pheatmap.

In heatmap, generally, columns are samples and rows are variables. Therefore we start by transposing the data before creating the heatmap. 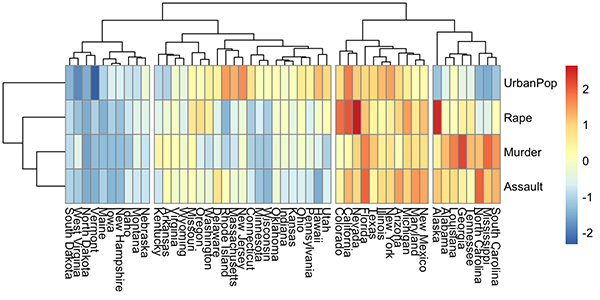 This chapter presents the most commonly used unsupervised machine learning methods for summarizing and visualizing large multivariate data sets. You can read more on STHDA website at: