Multidimensional scaling (MDS) is a multivariate data analysis approach that is used to visualize the similarity/dissimilarity between samples by plotting points in two dimensional plots.

MDS returns an optimal solution to represent the data in a lower-dimensional space, where the number of dimensions k is pre-specified by the analyst. For example, choosing k = 2 optimizes the object locations for a two-dimensional scatter plot.

An MDS algorithm takes as an input data the dissimilarity matrix, representing the distances between pairs of objects.

The input data for MDS is a dissimilarity matrix representing the distances between pairs of objects.

There are different types of MDS algorithms, including

It’s also known as ordinal MDS. Here, it’s not the metric of a distance value that is important or meaningful, but its value in relation to the distances between other pairs of objects.

All these functions take a distance object as the main argument and k is the desired number of dimensions in the scaled output. By default, they return two dimension solutions, but we can change that through the parameter k which defaults to 2. 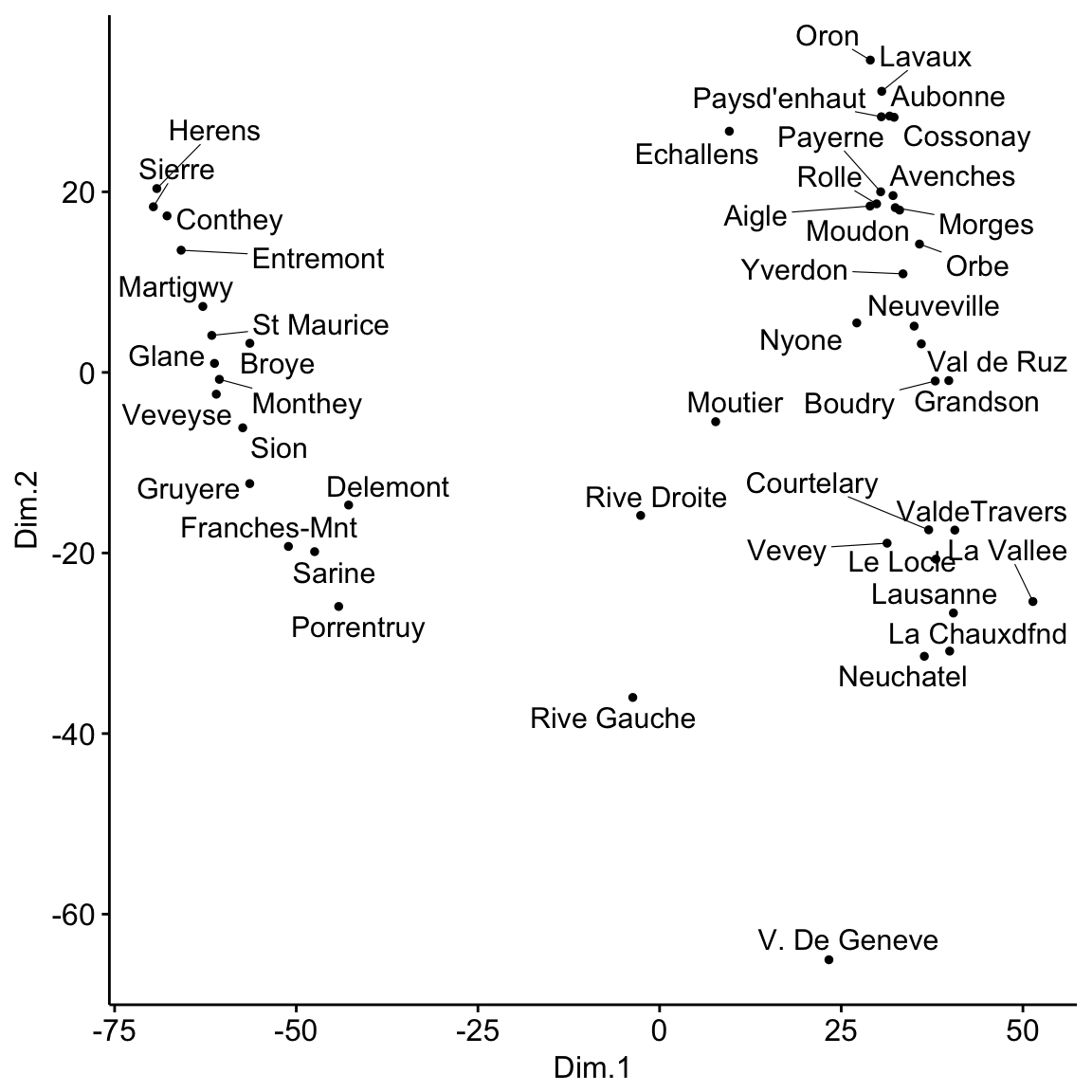 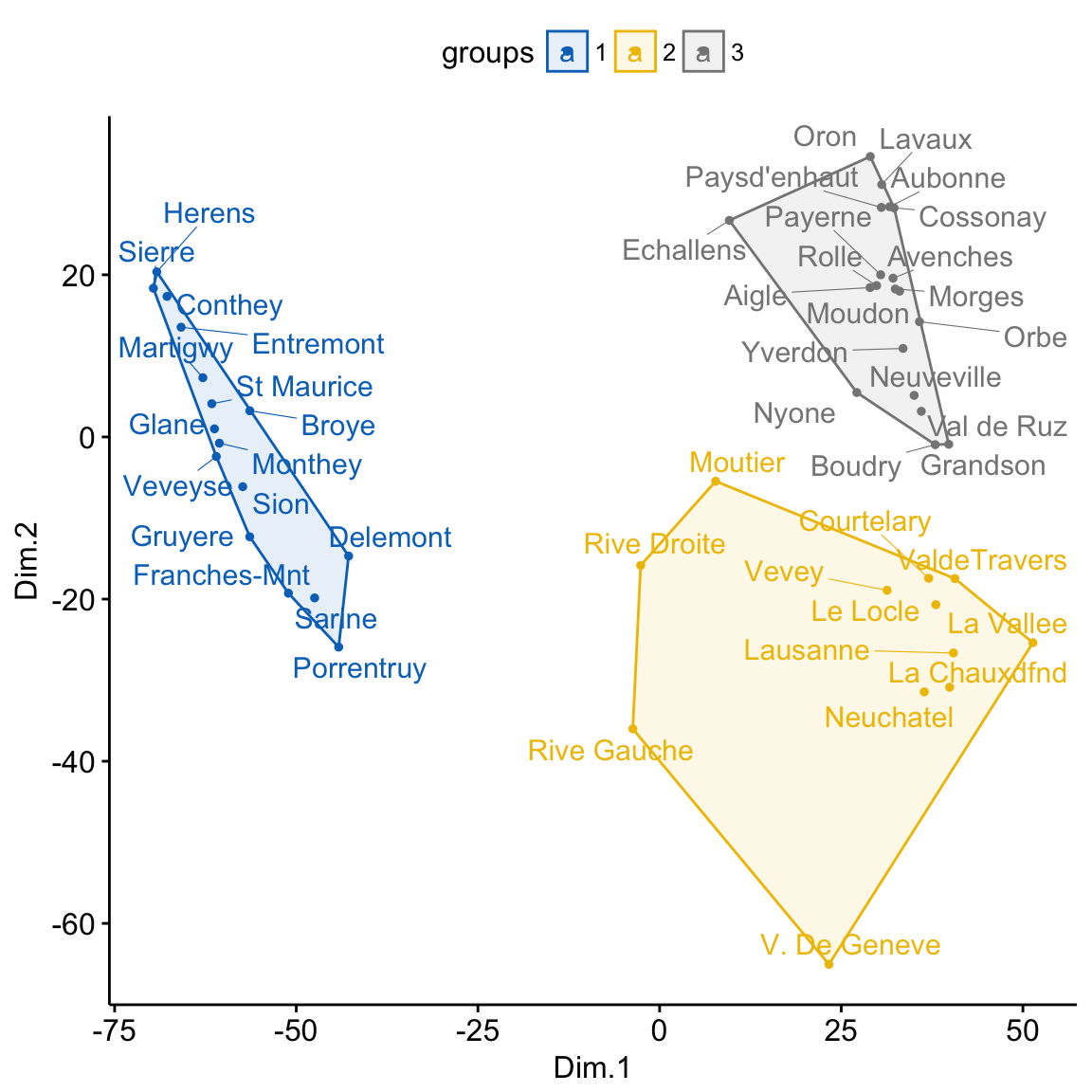 MDS can be also used to reveal a hidden pattern in a correlation matrix.

Correlation actually measures similarity, but it is easy to transform it to a measure of dissimilarity. Distance between objects can be calculated as 1 - res.cor. 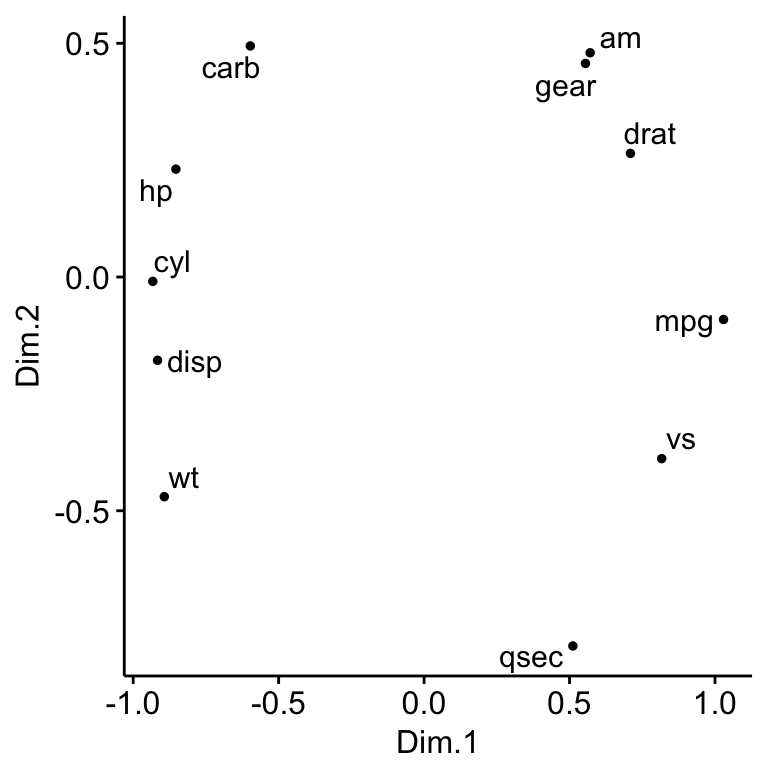 Positive correlated objects are close together on the same side of the plot.

Mathematically and conceptually, there are close correspondences between MDS and other methods used to reduce the dimensionality of complex data, such as Principal components analysis (PCA) and factor analysis.

Thank you for your positive feedback! Highly appreciated
Visitor
Visitor

I read the post several times
and carefully entered the MDS examples
in my Rstudio, (Ubuntu Linux-32bits)

Thank you, Kassambara
for your patience and very clear explanations.

One of my top favorites.

In the last plot, we used MDS to visualize a correlation matrix between variables in the mtcars data set.

We used `1 - correlation.coefficient` as distance measure.

- Points that are on the same side of the plot are positively correlated. Example: am & gear. This means that an increase in am values is associated with an increase in gear values and vice-versa
- Points that are on opposite side on opposite sides of the plot are negatively corrrelated. Example: mpg and wt. When mpg increases then wt decreases......

I now understand the technique
to generate the last MDS plot
in this article, (mtcars).

But I'm still having difficulty
expressing in plain English (to a business person),
what this last plot means
for mtcars,
if the closest distance is between
the am and the gear points?.

How to interpret
in practical,
simple English language,
what this last MDS plot means for the mtcars data ?...
(if these 2 points are closest to each other,
than the other points in this plot...)

Will read the suggested
STHDA article, next.

STHDA
is truly one of my favorite learning sites.
A+...
kassambara
Administrator

Dim.1 and Dim.2 are principal component analysis dimension 1 and 2.

This article is really good
and very clear!.